Minute Maid Park in Houston, Texas will forever be a sort of “Mecca” for White Sox fans everywhere. It’s the place where the Sox ended their 88-year World Series drought in thrilling fashion back in 2005.

This weekend I found myself in Houston, visiting friends, and attending the Astros-Royals game on Saturday night.

This was my second time making the pilgrimmage to H-Town to witness a baseball game. Last summer I went to two White Sox games there in the middle of the summer. I was overwhelmed walking into the place. Knowing full well that this was the exact place that my White Sox won the WORLD SERIES 11 years earlier.

I had chills for two days straight.

The Sox took two of three in the series, and I went back to Baton Rouge without thinking twice.

But a lot has happened since that scorching hot weekend series in early July. The White Sox season would spiral out of control in the second half, and the biggest rub of it all would be the Cubs winning the World Series in October. A gut punch for Sox fans no matter how you slice it.

The way the White Sox ’05 accomplishment was seemingly white washed and erased by the media back in October was infuriating to the core. Many of us kept our mouths relatively shut to not kick dirt on the Cubs’ moment. It was their time, not ours.

But there were many moments throughout November where I felt like it would never be our time again. That, of course, was incredibly short sighted. Sox GM Rick Hahn proceeded to initiate a long term, sustainable, Cubs-style rebuild on the south side, and our faith was suddenly stirred again.

Fast forward back to this weekend. I’m sitting in the Minute Maid Park bleachers watching an Astros team, one of the AL’s best, that was God awful five years ago. Houston lost 100+ games in the not too distant past.

I’m watching this team and fanbase that has been totally re-energized by the team’s slow and steady rebuild. Houston absolutely buzzes around MMP on days the ‘Stros are playing. The way Astros fans have embraced Carlos Correa, Alex Bregman, Dallas Keuchel, Jose Altuve, and countless other players is the same way I’ve seen Cubs fans embrace their core guys.

That’s what I want for the White Sox. In the worst way possible.

My phone buzzed. A Twitter alert from the Charlotte Knights game (the Sox Triple-A affiliate). Top prospect Yoan Moncada had continued his tear to start the season with another base hit.

I almost couldn’t believe I was sitting in Houston, Texas checking on notifications from a White Sox minor league game. But I’ve come to learn that’s what you’re supposed to do during a rebuild.

After watching my former LSU classmate Alex Bregman ground out to third base in the fifth inning, I had to get up and just walk around.

I walked from our right field bleacher seats up to the 300 level to get a glimpse of MMP and the Houston skyline from the top.

Breathtaking. Americana at its finest. 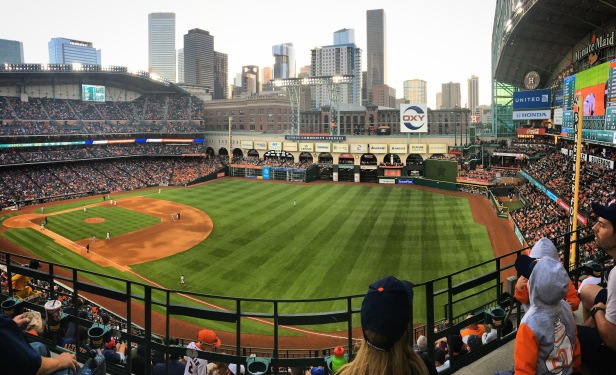 I kept thinking about the White Sox. I kept thinking about what they might look like in a year, in four years, in seven years… I just stared at the field where they won the World Series for a good ten minutes from this spot. Not even focusing on the game at hand or the people around me. Just thinking, envisioning things.

Sports make you do seemingly crazy stuff. So does faith.

My phone buzzed. Another Twitter alert from the Charlotte Knights game. Moncada had just hit his first home run of the season.

I proceeded to roam around the top of Minute Maid Park, soaking in everything that’s great about baseball. The sights, and especially the smells.

I bumped into a husband and wife around the area behind home plate. The wife was wearing a White Sox hat! I had to do a double take. I couldn’t believe it (I actually could, Houston is a huge transplant city. There were a ton of Sox fans at the games a year ago. It was so fun.)

They both looked back at me with an expression of equal surprise and shock that someone had noticed. The husband, stunned, replied, “Yeah man!” The lady had the biggest grin on her face. We shared a quick moment and then parted ways forever.

I continued my trek around the top of the park, back down to the lower concourse (bought a Bregman shirsey, Geaux Tigers), and back to my seat.

The Astros proceeded to blow a 2-1 lead by giving up a six spot in the eighth, eventually losing the game 7-3.

As we all shuffled out of the ballpark, I checked my phone and was bombarded with a hundred Knights notifications. I told my friend, “Hey man, Moncada went yard tonight.” He didn’t give a crap, he’s a Yankees fan going through a similar rebuild.

Walking away from that game at Minute Maid, I was stirred with so much fresh hope for the White Sox organization. Like the Astros and the Cubs it’s going to take time, it may sting for awhile, and we’re going to have to be really patient. But it can happen.

We have to be the ones to believe that it can happen again.

As I left the site where it did happen 11 years ago, I was filled with so much belief that it’s going to happen again. Someday.